Vinyl records have been enjoying a healthy resurgence. We regularly receive projects destined for 12″, 10″ or 7″ release – just let us know at the time of booking or if you anticipate it for the future. For a little extra charge and new production parts you can save yourself a lot of headaches. The same applies if you are going for a vinyl release and then wish to go to CD or online release in the future.

Having your release pressed to vinyl is still a niche thing and unfortunately most audio mastering facilities are no longer cutting lacquer masters, with many having sold their lathes. At Deluxe Mastering we supply you with high resolution mastered audio files and, locally, we recommend cutting and pressing via Implant Media, or in the UK The Vinyl Factory (with lacquers cut at Abbey Road). 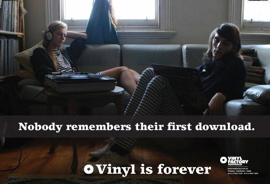 As always, feel free to contact us if you need your mixes and/or test pressings assessed. There are things we can do to minimize any issues and avoid you needlessly cutting records from audio CD (bypassing the extra conversion stages that apply for CD).

In an online world many artists and sound engineers don’t always consider vinyl. Lacquers and lathes are mechanical devices and there are consequences when you increase level, or have elements of a mix out-of-phase due to certain recording or mixing techniques. When mastering to lacquer, issues like sibilance (excessive high frequencies), excessive bass level or out-of-phase bass can cause issues in the quality of the cut, particularly if you are trying to stay true to the mix (which is the essence of good audio mastering).

Aside from our recommendation to always budget for and order test pressings, the most crucial aspects for a great sounding cut on vinyl are side lengths (see table below), sibilance, and the amount of bass (which should preferably be mono / panned centre). While such things are best addressed in mixing, an ounce of prevention in avoiding issues is better than a pound of cure. Many vinyl pressing plants often find difficulties cutting supposed “vinyl masters” from engineers who have had no experience with lathes themselves. The true aim is to make your release sound great, not to second-guess the cutting stage. Ultimately, the sound of your finished vinyl records is in the hands of the engineer cutting the lacquer master. The sound off your vinyl record will differ slightly to that from digital/CD – that is the nature of the beast.

TIPS TO HELP YOU PREPARE FILES FOR VINYL MASTERING

Accompanying the Master must be a clearly legible Table of Contents (TOC) or cue sheet showing the start and finish times of each track, or files labeled with side and track number, artist and title, track titles, label and catalogue number (if used) and, if you like, any inscriptions required on the vinyl run-out groove (limit 10 characters). Failure to do these things may make the process take longer than needed and the extra time will be billed out to you. Unless specifically instructed otherwise, your master is cut exactly as presented. Of course a dub plate (lacquer reference) and/or test pressings can be made for your approval, at extra cost.

Vinyl discs have limitations on side lengths, which vary according to the speed and diameter used, and the audio itself. The longer the sides, the quieter the signal has to be cut, although it will generally be cut as loud as possible. The following table lists the typical dB levels available for the various vinyl formats:

Note: 33 rpm on 7 inch is generally not recommended for music, as it has significantly less high frequency (treble) response and higher distortion than 45 rpm.

Remember, unlike CDs, audio level on vinyl is relative. There’s nothing to be gained by squeezing your music through a digital maximizer set to ‘stun’ to produce a constant maximum digital level of 0dBFS. In fact, it can make the lacquer cutting process more difficult (and costly). In the digital world the 1’s and 0’s don’t get any wider or deeper or use up more space on the disc – unlike on vinyl.

For audio signals which are “in-phase” with each other, the stylus moves nicely from left to right; when “out-of-phase” the stylus moves up and down, causing it to jump out of the groove given half a chance (see the animated graphics here). In the good old days of expensive studios, most good consoles had a phase correlation meter on the output (as we do on the mastering console). Since phase issues are less relevant to digital formats this expensive extra is usually unavailable to today’s engineers, leading to major headaches when trying to cut vinyl from digitally mixed masters.

Especially critical is the bass – when this is out-of-phase the recording can be near impossible to cut. Extremely “subby” dance mixes usually present the biggest problem but are OK if the bass & kick are in phase. It’s not such a problem for lo-fi garage recordings, unless the feedback gets REALLY trebly and piercing, which will be removed during cutting anyway. Well-recorded acoustic music is no problem at all. Most problems come from live recordings made from the desk, or from stereo samples where a plug-in has removed a solo instrument or leaving the rhythm track. Using stereo widening plug-ins is often disastrous, and may cause the inner tracks to sound dull. Mono samples panned near to the center don’t have the same problem.

How can I tell if my mix has phase issues?  If you don’t have a phase correlation meter on your desk or in your hardware, try inverting the polarity of the left or right channel of your mix and listen to the result in mono, panning both sides to the center. If the mix is entirely in-phase and the levels match, then the result will cancel to almost silence. Reverbs and flanged/phased sounds won’t entirely cancel because they rely on out-of-phase signals in order to work. As long as the result of this “null” signal is free of very low frequencies, there won’t be a problem. If significant bass still comes through, there will likely be a problem and the record may need a remix in order to be cut at all.

Hint: Many mixers invert the polarity of the signal from the Aux sends, so you can send one side of the mix from an Aux send, return it to another channel and then mono it as above to check for phase errors. Be sure to bring it up with whoever is mixing your next recording and we won’t have to spend 6 hours $1,000 dollars of studio time and $300 in acetates waxing those phat beats.